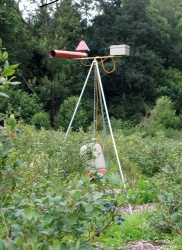 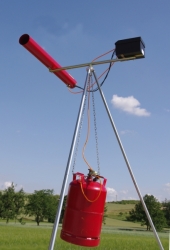 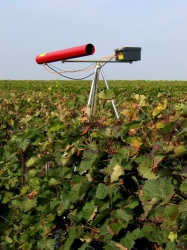 The Purivox Carousel Triplex V is the most popular device of the Purivox Triplex V vird scaring device series. The Carousel is specially made for bird control on large areas of 4-5 hectare.

Depending on the crops, landscape and the birds, it is even possible to cover nearly 25 hectare with one Purivox Carousel Triplex V!

The unit has the proven for years famous Purivox Triplex V electronic unit. This electronic creates a 3-way shot. This shot sequence is perfect for controlling the birds and wild animals.

The Purivox Carouse Triplex V is used in:

The volume of the Purivox Carousel Triplex V can be set in two steps by the electronic unit.

The special part of the Carousel lies in the design. The sound tube and the electronic unit are stored on the top of a tripod. If the first shoot will be fired, the unit will start rotating caused by the thrust from the explosion. This makes it possible to cover the full 360° around the unit. The Purivox Carousel is on the tripod in a high of 2 Meters and by the tripod it can be build up on any surface.

The gas regulator, specially designed for the Purivox gas cannon devices, can be equipped with three different connections.

The digital 12V NFC Timer is a valuable tool for optimal bird control and wildlife control.

The weekly timer can be easily configured via an NFC interface. All you need is a smartphone that supports NFS and the right app. With the timer it's simple to set different time windows.

IMPORTANT: A lot of shooting doesn't help much. Above all, only shoot at the times when the birds are there and shoot only as much as necessary. 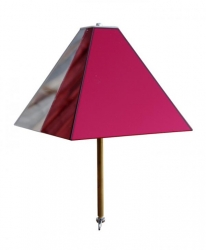 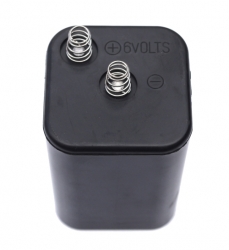 Increase the radio range for the Purivox radio controlled gas cannons for a sucesfull bird control!